Scottish films - what are your favourites?

spoots Member ✭✭
February 2018 edited February 2018 in Arts and Culture
Scotland has inspired filmmakers for many, many years - from the sweeping golden strand of Gairloch, recently used in the film What We Did on Our Holiday, to Princes Street in Edinburgh which was the scene of Renton and Spud's epic dash in Trainspotting, people have been pointing cameras at Scotland's landscapes for decades.

But what are your favourite Scottish films?  Here are three of my favourites:

All right, so I know that this is cheating.  But the movies were set in Scotland - or at least partly filmed there.  Remember the Hogwarts Express? That is the Glenfinnan Viaduct, on the railway from Fort William to Mallaig.  You may have known that much...but did you know that the viaduct is made entirely out of concrete?  Robert 'Concrete Bob' McAlpine masterminded its construction, and the viaduct was opened in 1901.  Nowadays, the viaduct has achieved fame for its appearance in the Harry Potter films.  To ride over it, catch the train from Glasgow Queen Street to Mallaig (https://www.scotrail.co.uk/scotland-by-rail/great-scenic-rail-journeys/west-highland-line-glasgow-oban-and-fort-williammallaig) - or you can even get on The Jacobite steam train from Fort William (http://www.westcoastrailways.co.uk/jacobite/jacobite-steam-train-details.cfm).  A journey on the West Highland Line to Mallaig is one of life's great railway journeys - and it's one of the best in the world, although there are plenty of competitors even within Scotland!

Whisky Galore! is a classic Scottish film, produced by Ealing Studios and starring Basil Radford and Joan Greenwood.  The story was based on a real-life incident when a tanker full of whisky ran aground off Eriskay, in the Outer Hebrides, in 1945.  The film was shot in Barra - and it makes for very good viewing.  It's still very funny, and his even inspired a recent remake starring Eddie Izzard (though the original movie is much better).  The film is full of Scottish heart and it remains a favourite of mine.

This film was written and directed by Bill Forsyth, who was also behind the Scottish classics Gregory's Girl, Comfort and Joy and That Sinking Feeling.  Local Hero may well be my favourite movie of all.

Featuring a stellar cast - Burt Lancaster, Denis Lawson (Wedge Antilles from Star Wars), Fulton Mackay and Peter Capaldi all feature - the film stars Peter Riegert as an American oil executive, Mac, sent by his boss (Lancaster) to the coastal village of Ferness on the west coast in order to replace it with an oil refinery.  Mac soon finds himself falling for the fishing village, although the villagers themselves hope to move away from their hard life in Ferness. 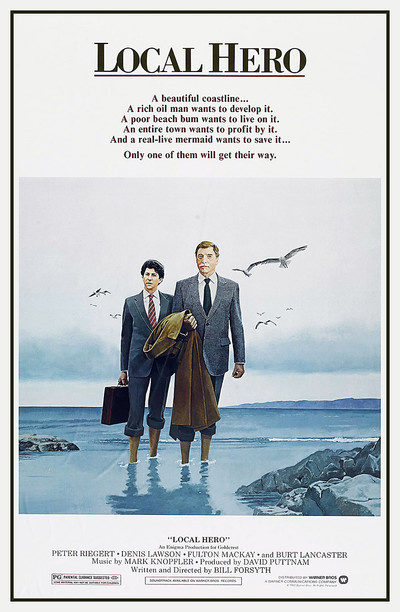 Ferness itself does not exist.  The village scenes were filmed at Pennan, in Aberdeenshire, and you can go and look around the village.  The scenes on the beach were shot on the long sweeping Silver Sands of Morar, near Mallaig, with other coastal scenes shot in the West Highlands.
You can get to Morar by train from Glasgow Queen Street and Fort William via the scenic West Highland Line, crossing the Glenfinnan Viaduct.
On Saturdays, there are two buses per day in each direction from Banff to Fraserburgh via MacDuff and Pennan; this is the only way to reach Pennan via public transport.

The whole movie is exquisitely observed, and studded with gems of gentle humour whilst retaining the unique atmosphere of a Scottish fishing village.  For me, this film is incredibly nostalgic.  It features a great soundtrack by Mark Knopfler (the Glaswegian frontman of Dire Straits) and also has a very real heart and soul.  A lovely film.

But what are your favourite Scottish films?
instagram: @samstevensyrk
https://www.instagram.com/samstevensyrk
2